7 Mistakes to Avoid When Designing Your App 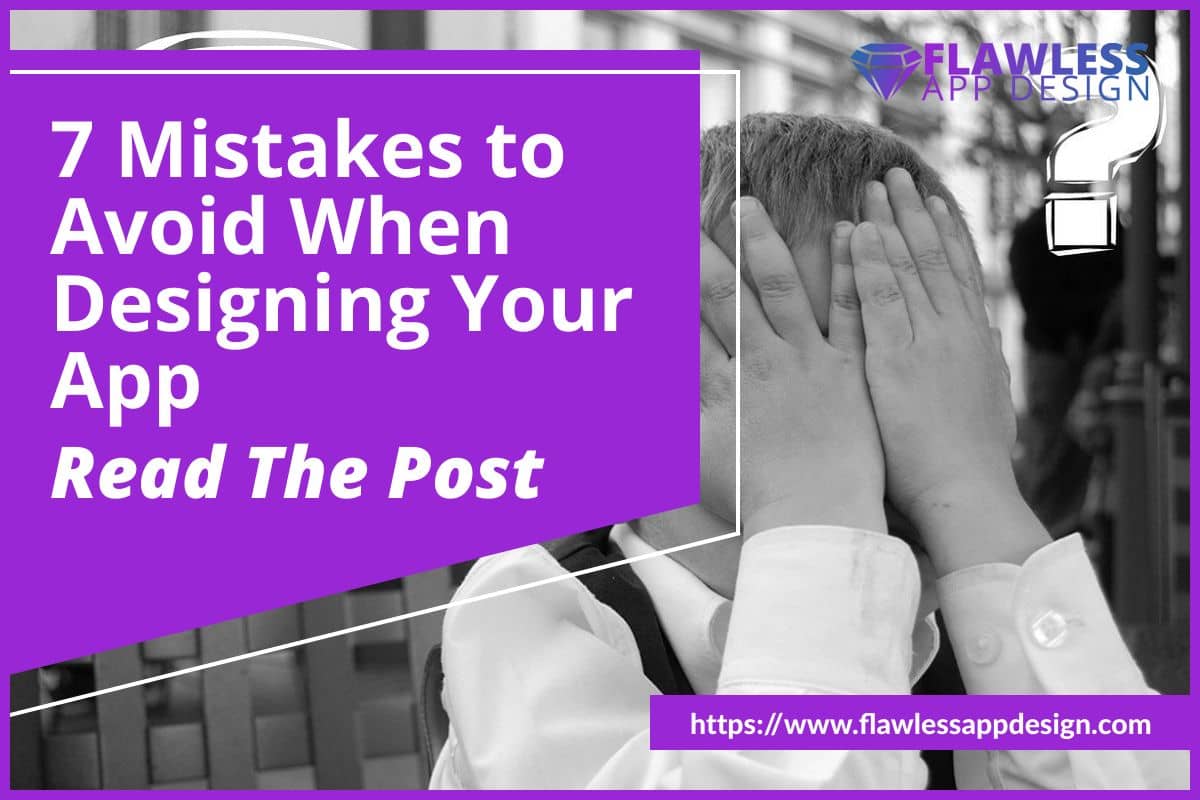 If you’ve been looking for a good example of a poorly designed app, look no further than the pre-installed apps on your phone. In fact, you need only look as far as your own home screen to see more than 7 mistakes to avoid when designing your app by those who should know better. And even if those apps are the most downloaded in the world, that doesn’t mean they’re free from criticism.

This article will highlight some of the most common mistakes made in designing an app and hopefully serve as a checklist for when you start work on your own design. It isn’t exhaustive, there are literally hundreds of things to consider when designing an app, but it aims to be a good starting point for your own work.

7 mistakes to avoid when designing your app:

Whether you have a scrollable list or a single page, navigation is an important part of any app and if not done correctly can result in confusion. This should be at the forefront of your design process as it will directly affect how easy your app is to use.

If the user doesn’t know where they are, or where they can go next then the result of using your app will be reduced. Some good questions to ask yourself about navigation are:

– Is there a clear visual indication of the user’s current location in the app?
– Is the menu accessible with only one click of the screen?
– Are users informed of their current location?
– Does every page have only one way to get back to the home menu?

Of course, these are just some questions that you should be asking. You might find more relevant ones depending on the type of app you’re designing. Regardless, it’s important to think about navigation early on in your design process. This is only the first of 7 mistakes to avoid when designing your app.

This is a result of the above issue but extends beyond navigation to include any part that might be confusing or difficult for users.

Some examples might include an app without an obvious way to close it, a page with too many options, the use of cryptic symbols instead of text.

As a design is implemented more and more, the user may discover more things that don’t work. As a result, someone who was enthusiastic to use your app the first time might quickly lose interest. In order for an app to be successful, it has to stand up under pressure from multiple users with multiple needs.

It may seem obvious, but it’s important to point out that if you create an app with a bad design, then more than likely nobody will use it. If there’s no one using your app then that means that there is no one benefiting from the service and paying for any in-app transactions.

As a result, using a poor design is likely to start a negative spiral as you lose more and more customers, which leads to fewer transactions, less income, and so on.

Once an app is released it has to stand the test of time without requiring any changes in design or code. As a result, spending too much time working on an app early on in the design process can result in reworking work to accommodate future changes.

As an example, you might decide later that certain data requires a visualization rather than a list or vice versa, or change your mind about the way you want users to interact with the app, which could result in changing all of the code and user interface.

For this reason, it’s important to get it right the first time around, which may require spending more time working on your design.

Design is subjective and while you might be pleased with what you’ve created at the end of the day, you might not think that other people will like it. As a result, it’s important to ask for feedback from friends and family if possible. There are many reasons why you shouldn’t design an app yourself, rather you should hire an expert to do the job right the first time.

Doing this early on in the design process can help you ensure that you’re creating something that will appeal to a wider audience. It’s also good practice as you’ll be less attached to any one idea or solution at this stage than when you’ve already invested time into your work.

When you release an app, it’s important that the person who created the app has access to feedback, whether it is design-related or not. As mentioned in mistake number five, designing for yourself can lead to creating something that other people don’t like which could result in negative reviews and little to no downloads. Here’s a great article that shows you how to get customer feedback from mobile users.

As a result, it’s important that you’re present when users are using the app so that you can ask them about their experience or understand where they see any problems with its design.

The last of the 7 mistakes to avoid when designing your app is about collaboration and feedback. It’s important to work on your app design with other people so that you can share ideas and discuss potential issues. This can be as simple as showing your design to a friend or colleague, or as complex as working with a team of other designers. When getting feedback, it can easily show you more than 7 mistakes to avoid when designing your app and how to fix them before you launch it.

Designing in isolation can lead to you missing out on things that another person might see and think about. As a result, it’s important to work on your app design collaboratively so that you can make sure that everything is accurate and looks as it should.

As mentioned above, design is subjective and what you might think looks good, someone else might not agree with. You can avoid the 7 mistakes to avoid when designing your app by asking other people to look at your design early on in the process, which will help reveal any problems before you get too invested in your work.

These are just 7 mistakes to avoid when designing your app, but they’re some of the most common. If you’re interested in learning more about designing your app then feel free to visit our Flawless App Design blog. We have plenty of other posts available for you to read which are all related to design.

Mobile app development is a process that involves many disciplines and requires a lot of time, effort, and resources. Mobile App Development For Small Business can be done by yourself or with the help of a company. Mobile apps are the new way to reach customers in...

7 Essential Mobile App Features That Every Business Should Have

A business app can provide all the functionality you need to run your company. It's just a matter of deciding which features are most important to you and your business and then building an app that offers those features. So how do you know what features should be top...

App Design Cost: What Goes Into It?

It’s not easy to create a successful app. In fact, it can be downright expensive from the get-go. And while many people think they have what it takes to design their own app on a shoestring budget, most do not realize that this is one of the quickest paths to failure...